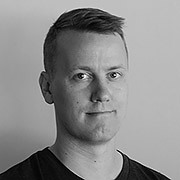 Ian Joyner specializes in crafting conceptual character artwork for a variety of films, games, products, and commercial illustrations. Having worked on a plethora of top movies and games over the last decade, including The Amazing Spider-Man, The Avengers, and The Hunger Games to name a few, he has helped many directors and creators bring their visions to life, from pitch to completion. Ian worked for six years at Legacy FX (formerly Stan Winston Studios), and prior to that, he worked at Blur Studio creating characters for everything from film pitches to critically acclaimed video-game cinematics. Ian feels lucky to be able to live his dream creating monsters, superheroes, and fantastic new worlds!