From Thumbnails to Finished Pencils

In this demonstration, Stephen Platt covers how to create a fully penciled page from beginning to end. He begins with exploration in the thumbnail stage and enlarges the chosen rough thumbnail using a photocopier and lightbox. During the course of the demo, Stephen shows how he indicates change in form, graduated shadows, texture and mass, all while maintaining a dramatic graphic expression. In addition, he discusses industry conventions as well as advice on portfolios and earning a living in professional comics. 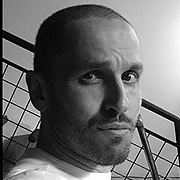 Stephen Platt is a professional concept/comic artist living and working in Los Angeles. He has been working in the field of comics for thirteen years. His comic clients include Marvel Comics, DC Comics and Image Comics. Stephen has drawn various titles including “Moon Knight”, “Cable”, “Wolverine” and the best selling “Wolverine/Cable” graphic novel. He also worked on his own creator-owned title, the best-selling ”Soul Saga” published through Image Comics. He has collaborated with some of the industry's most respected writers including Alan Moore, Jeph Loeb, Chris Claremont and Joe Casey. Stephen continued to expand his artistic horizons when he began working in the film industry as a conceptual artist/art director. In addition to having directed visual effects on various award-winning music videos, Stephen's credits include Blade III, Torque, The Fog, John Carter of Mars, Neuromancer, Outlander and Iron Man.