Introduction to FLIP Fluids in Houdini

Danny Barnhart cracks open his simulation secrets with a close look at how to create fizzy fluids in Houdini. Using a champagne flute and a bubbly liquid for this beginner- and intermediate-level demonstration, Danny walks through the entire process of simulating a champagne pour, from the initial setup of the fluid emitter to the final lighting and rendering. The workshop aims to familiarize artists with Houdini’s FLIP Solver as well as instructing how to work with particles to create believable motion.

Starting out with Houdini’s Shelf tools, this 3-hour workshop begins with how to create a simple setup of geometry emitting fluid into a glass object before diving into the simulation work. Danny then delves into creating custom attributes in Houdini to replicate the interaction between foams and liquids, and reveals how to use custom attributes to create differentiation in motion between liquid and foam particles as they interact.

Once the main simulation is cached out, the workshop moves into setting up the resulting foam particles for rendering and meshing the liquid simulation. Once the two main elements are set up, Danny walks through creating additional particle simulations for further bubble and fizz elements. When all of the elements are cached out, the training discusses basic lighting and shaders to render out a final simulation in Mantra, the highly advanced renderer included with Houdini. 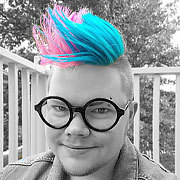 Danny Barnhart is an Effects Artist and story enthusiast who has worked in feature animation, TV, and commercials. His credits include Turning Red at Pixar, Spies in Disguise at Blue Sky Studios, and the episodic television shows Dispatches from Elsewhere on AMC, Hightown on STARZ, and Evil on CBS, as well as many commercial projects at Powerhouse VFX.

Danny graduated from Savannah College of Art and Design with a major in Visual Effects and, while FX is his focus, he also enjoys exploring other areas of the pipeline, as well as sharing his skills through teaching. He is passionate about working with other artists on projects that have an impact on their audience and especially loves contributing skills and voice to media that uplifts and highlights the experiences of marginalized groups. He currently works as an Effects Artist and Story Consultant at Pixar.