Designing environments for film, games or animation requires an iterative, collaborative and flexible workflow. In this title, Olivier Dubard shares his Visual Development process as he takes an idea from early concept and initial sketches to final presentation using Sketchbook Pro, MOI 3D, Maya, V-Ray and Photoshop. Starting with 2D ideation and simple geometric shapes that define form language, he then moves into 3D block out in MOI 3D. This initial layout is then 3D rendered and refined in 2D with Autodesk Sketchbook Pro, using the perspective tool to design naturally and accurately. With the design established, he experiments with composition and camera in Autodesk Maya to find the view which best illustrates the design. A chapter on color then demonstrates how to start giving life to the concept through the use of different color schemes. Once the design for the overall image is resolved, it is time to move onto techniques which will help finalize a professional presentation. He explores this process with a specific prop before applying it to the entire image, allowing him to explore what the best process will be. It is at this point that the final illustration is worked on in Photoshop as it is made ready to show the director, client or producer. For those interested in integrating both 2D and 3D techniques to illustrate designs, this title provides a wide range of techniques and workflow that efficiently produce professional results. 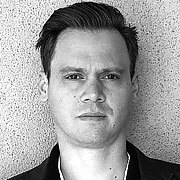 Olivier Dubard is an Environment Artist specializing in film and cinematics. Having a strong background in Comic Books and Illustration, he handles different aspects of production, from concept to the final photo-real composited CGI image. Born and raised in Reunion Island (France), Olivier developed a great interest for art when he moved to Paris. He gained experience and knowledge in the traditional art of painting and drawing, then decided to transfer his knowledge into the film industry by attending the Gnomon School of Visual Effects in Hollywood. His work and commitment led him to work for such companies as Digital Domain, Double Negative, The Mill LA and Aaron Sims Creative. Today he continues to create digital environments for the film industry, having contributed to various projects including 'Star Trek Beyond', 'The Hunger Games' series, 'Terminator Genisys', 'Alice Through the Looking Glass', 'The Huntsman', Disney’s 'Beauty And The Beast' and the 'Call of Duty: Black OPS 2' game trailer.