In this first title of a series, Cecil will demonstrate how he quickly produces various design options using traditional drawing tools such as markers, ink pens and mechanical pencil. Cecil will guide you through more than eight environment production sketches describing how he creates various drawing concepts to support creative leads and a production team on a daily basis. He will begin with concepting the main fortress buildings for a game level idea, continue with rough thumbnailing of the organic building profile, and also create a hi-level production vista shot of a city concept using pencil. Street angle environment layout and futuristic design are explored as well. Learn how Cecil establishes perspective layout, filling it with architectural details, as well as how he designs the surface of the abstract shapes he initially starts with. 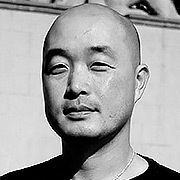 Cecil Kim has been working as a concept artist and illustrator in the entertainment industry for the past 15 years. Originally from Seoul, Korea, Cecil moved to the U.S. with a dream to pursue an art career, and studied Illustration and Fine Arts at the prestigious Art Center College of Design. Cecil began his career in the game industry as a cinematic storyboard artist for SquareUSA. With strong layout and detailed environment sketches, he began designing memorable locations in Final Fantasy IX and later joined Sony Santa Monica Studio where he devoted seven years of his career creating the God of War series as Visual Development Lead. Cecil also teaches at various institutions such as Gnomon School of Visual Effects, Art Center College of Design and Otis College of Art and Design where he serves as Concept Art Area Head. From hi-level production art to prop design, Cecil's intuitive and energetic artistic style has been inspirational creative fuel to the directors and production team at Sony Santa Monica.